Not only did Xcel Energy Center provide a place to see some of the Wild’s future stars in person, it also proved to be the perfect remedy to scorching hot temperatures outdoors.

The event was organized by three local NHLers, including Hastings native Jeff Taffe, who recently signed with the Wild. Derek Stepan and Taylor Chorney, who are also from Hastings, are the other organizers.

The players will be available for an autograph session before the game from 5:30 to 6:30 p.m. Autographed jerseys will also be auctioned off after the game.

Tickets are $35 and can be purchased at the Hastings Ice Arena and the Cottage Grove Ice Arena.

Just a quick post from the Xcel Energy Center press box before fans start filing into the arena for tonight’s game against the hated Dallas Stars.

Well, we got what we were hoping for: The Blackhawks did in fact lose in regulation to Detroit in Chicago this afternoon, so tonight’s Wild game will have plenty of meaning behind it. Both teams in St. Paul will be skating with some extra jump in their stride tonight because the outcome will decide the No. 8 playoff spot in the Western Conference. Blackhawks Nation will be rooting for your Minnesota Wild because if Dallas earns two points, it will overtake Chicago for the final playoff spot. It will be the same Wild lineup tonight as it was for Friday’s game in Edmonton with Jose Theodore getting the start in net.

An interesting side note that was just pointed out to me by Mike Russo of the Star Tribune: Since Dallas needs to get two points tonight, and not just one, imagine if the game went to OT. We might very well see a goalie getting pulled in OT. And, because of a weird NHL rule, if the Wild won, Dallas would come away with zero points in the game. If you pull your goalie in OT and end up losing, you don’t get the one consolation point. Obviously, Dallas doesn’t care about one – two is the only number on their mind tonight. Still, it will be something interesting to watch for if this contest in fact goes past regulation.

As I wrote in today’s wild.com game preview, this game means plenty to the Wild. Yes, they want to make the home crowd happy. Yes, they want to close a disappointing end to the season with back-to-back wins. But perhaps most importantly, they want to play spoilers. Some Minnesota fans might still dislike the Stars after they moved to Dallas, but the Wild dislikes its six-game winless streak against the Stars and how chippy many of the recent contests between the two teams have been.

Fans should be clamoring to come down to St. Paul not only to root on the Wild’s attempt to play spoilers, but for the awesome posters that will be the free giveaway at tonight’s game. They look pretty slick and should quickly become the favorite wall decoration of all Wild fans.

Of course, no Lighthouse would be complete without a UMD mention (that’s a rule if you work for Glen, didn’t you know?) Obviously, the Dogs are the talk of college hockey after topping the University of Michigan last night here in this very building. It was a pretty cool scene to see the crowd and Bulldogs go crazy when the deciding goal was scored in OT. I haven’t seen Glen yet today, but I have to imagine he is still rocking a massive smile. No word on if he kept his promise of jumping in the Holiday Inn pool fully clothed after the Dogs first National Championship, but if he hasn’t, we might have to have some Wild TV fun tomorrow.

Posted in State of Hockey

The Minnesota Wild held their Tuesday morning practice at Xcel Energy Center today, but it didn’t exactly feel like home in there. To get ready for the Frozen Four, every advertisement has been removed from the boards. There’s not a Wild logo to be found in the entire arena bowl.

The college kids are coming in starting today, and following tomorrow morning’s practice, the Wild will hand over the keys to the NCAA. I heard a rumor that the UMD Bulldogs are one of the teams that will be at the tournament this weekend. Isn’t that nice?

What will be most interesting will be to see if any of the four participating teams have a higher shooting percentage than those basketball teams that played last night in Houston.

Several of the Wild coaches have a rooting interest in this weekend’s activities. Goaltending coach Bob Mason is a former Bulldog, while Assistant Coach Rick Wilson is a former North Dakota Fighting Sioux. Head Coach Todd Richards is a former Gopher, but he made it clear he will not be pulling for UND this weekend.

Eric Nystrom will be pulling for his alma mater, the University of Michigan. Nystrom played in two Frozen Fours, including his freshman season in 2002 when the Wolverines fell to the Gophers in the semifinals.

The one and only Kevin Falness, who will be filling in for Bob Kurtz on the play-by-play duties for the next two Wild games, spoke to several of the key players for this weekend’s games. The Connolly brothers from different mothers of UMD can be heard here. Wild prospect Sean Lorenz, who will face UMD as a member of Notre Dame, can be heard here. Legendary Michigan head coach Red Berenson can be heard here. And while I’m pretty sure there aren’t any UND fans out there, just for kicks, I’ll put Kevin’s interview with Chay Genoway on here.

Josh Harding was the other goalie on the ice, but Richards said not to expect him to play this season. Hear what the Head Coach told the media after today’s practice here.

That’s about it for the on-ice news. There is expected to be some off-ice news later this afternoon regarding a Wild business-related announcement. Stay tuned to Wild.com for those details.

Good afternoon, State of Hockey Legion! Hope your work weeks are off to a great start. Mine is a little busier than normal since Glen is spending the week with his family in sunny Florida, but no worries wild.com superfans (and I know there a million of you), I’ve got his back.

The Wild had an upbeat practice that lasted about 45 minutes at Xcel Energy Center this morning before departing for St. Louis. Both Mikko Koivu and Chuck Kobasew missed practice, but Head Coach Todd Richards said it was just a maintenance day for each of them and both should be back in the lineup tomorrow night against the Blues. Cam Barker and James Sheppard also took part in practice, but neither will travel to tomorrow’s game, nor will any of the other injured players.

An interesting side note from today’s skate was that much of the team was sporting the clean shaven look. I wasn’t at yesterday’s Wild practice, so I don’t know when exactly the razors came out, but I definitely noticed the lack of facial hair around the locker room today. I counted at least five guys that had trimmed nearly everything off, and I’m sad to say that includes Kyle Brodziak, who had been rocking his Movember stache for the last four months. Brodziak said he just decided to change it up but that it will probably reappear at some point. Farewell, Brodzstache. You made all of your fellow Movember dusters proud. 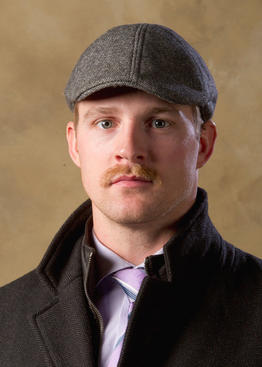 Onto the business on the ice, it was a fairly typical practice for the Wild, minus some line shuffling to adjust for the absence of Koivu and Kobasew. Richards did say after practice that he will start tomorrow’s game with different lines in hopes to get some productivity and chances in the offensive zone. That means the second and third lines should be shifted around, with Havlat possibly lining up with Cullen and Kobasew like yesterday’s practice. Jose Theodore will start in net tomorrow against the Blues.

In case you missed it, radio play-by-play man Bob Kurtz missed his first Wild game – ever – Saturday night because he was sidelined with a bad sinus infection. Kurtz had previously called all 912 Wild games – including preseason and playoff games – which in itself is an amazing stat. Kurtz is still under the weather so Kevin Falness will once again fill in for him. Feel better, Bob! Listen to Falness’ practice update in today’s PONDcast.

Finally, don’t forget to come join me, other Wild staff members and fans at the Wild Interactive Viewing Party tomorrow night at the Mall of America. Former Wild great Wes Walz will be on hand to sign autographs and there will be a ton of great giveaways including a game-worn Bouchard jersey, video game systems, Wild tickets and much more. Of course, we’ll have the Wild-Blues game on the big screen but the party starts at 6 p.m. so stop by. Get all the details here.

Posted in Injuries, State of Hockey

One last look back at St. Patrick’s Day, and then we move forward. When I try to think of word for St. Patty’s Day 2011, “sucks” comes to mind quite frequently. The Wild lost, every other Western Conference team won and the UMD Bulldogs lost to Bemidji State in the WCHA Final Five. Plus, my Final Five brackets is completely blown to rubble.

Thankfully, it’s over, and today is shaping up to be a much better day. It starts with University of Nebraska Omaha head coach Dean Blais being named as the head coach of the U.S. National Junior team, which will take part in the World Junior Championships starting in December in Calgary and Edmonton. Of course Blais led the United States to a gold medal in the 2010 World Junior Championships, and the guy pretty much knows how to win.

While we’re on the subject of amateur hockey players and Minnesota natives (Blais is a native of International Falls), there are two Minnesotans that were named as finalists for the 2011 Hobey Baker Award. Duluth’s Jack Connolly (UMD) of Minnesota-Duluth and Edina’s Chase Polacek (RPI) are among the final 10. The other finalists are Cam Atkinson (Boston College), Carter Camper (Miami-Ohio), Matt Frattin (UND), Andy Miele (Miami-Ohio), Gustav Nyquist (Maine), Justin Schultz (Wisconsin), Paul Thompson (New Hampshire) and Paul Zanette (Niagara).

Also, the Wild is one of four teams (Chicago, Columbus and Detroit are the others) that will be honored by the U.S. EPA for redistributing unsold arena food to those in need.

In cooperation with food provider Levy, the Wild have rerouted 6,220 pounds of food. Levy and Joseph’s Store House coordinate the pick-up and distribution from Xcel Energy Center after Wild home games. On March 26, the EPA will celebrate the Wild’s environmental achievements, presenting the Club withe a plaque on the “Let’s Play Hockey” FSN stage during intermission.

Posted in State of Hockey